“We do not need magic to transform our world. We carry all of the power we need inside ourselves already.” ― J.K. Rowling

On first view, the town of Shelburne, Vermont, seems like any other quiet New England hamlet. But each summer, something peculiar happens: young robe-clad wizards brandishing wands descend upon the town, turning the green and leafy hills into a training ground for the supernatural.

Welcome to Enchantment Camps, the brainchild of husband and wife team Joplin and Alison James. Now in its 10th year, the camp first began right before the release of the final book in the Harry Potter series, and has continued to teach and mold young wizards ever since.

“A Harry Potter movie was coming out the same week, and we sandwiched the camp between the Sunday movie release and the Friday midnight book release,” Alison explained. The first year was a huge success, and the couple decided to continue the business. 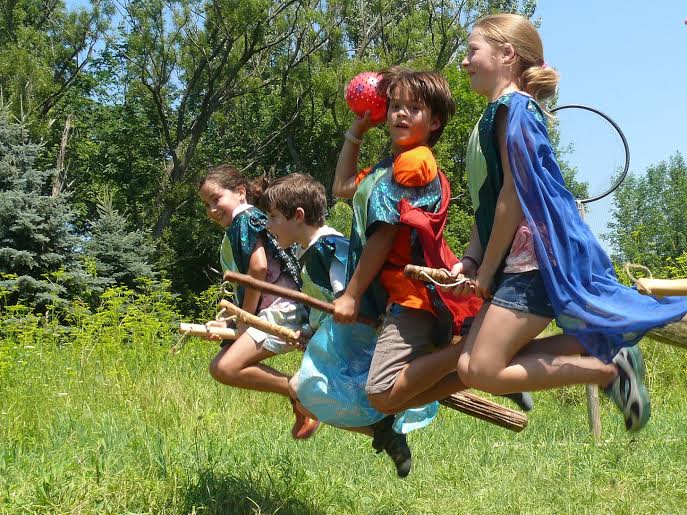 One way they keep to Hogwarts traditions is by playing Quidditch every day.

"Respecting JK Rowling’s intellectual property, since I'm a children's book author as well, we created the ‘American Academy of Wizardry’,” Alison said, adding that the camp “stays true to her magical world in some ways."

While Enchantment Camps isn’t quite an American Hogwarts, it does give children the opportunity to let their imaginations run wild and helps them see the magic all around them. “We do real magic as far as we can take it, and then move across that blurry line into imagination,” Alison explained. “Real magic includes, for example, potions, where we work with the magic of yeast, making bread, sourdough, or root beer,” the magical properties of which, Alison said, take up a seven-page booklet.

In Animal Communications, a weeklong camp in mid-July, the young wizards learn intuitive communication skills with both pets and wild animals, “with surprising accuracy,” Alison says. On other days, campers investigate ancient magic traditions, learning about cultures from around the world, including Japanese kamisama and the Viking gods.

While the magical focus changes weekly, each camp session starts the same way: with wild, magical play in the backyard. Then, Alison and Joplin deploy a sorting hat to separate the young magicians into the houses they will join for the week. “Then everyone gets a pendulum,” Alison explained, and children learn how to dowse their own energy, and then dowse for a wand.

“Each wand is handcrafted with local woods, and each wood has magical properties that resonate with the particular child,” Alison explained. “In ten years, we've never had an argument about whose wand is whose, because with the pendulum, the wand truly ‘chooses the wizard.’”

The young wizards, dressed in robes and clutching their new wands, go out to see the trees from which their wands were made, and then break into groups to create “skits” for a spell-casting tournament, which usually, Alison said, turns into a wild, dramatic play. 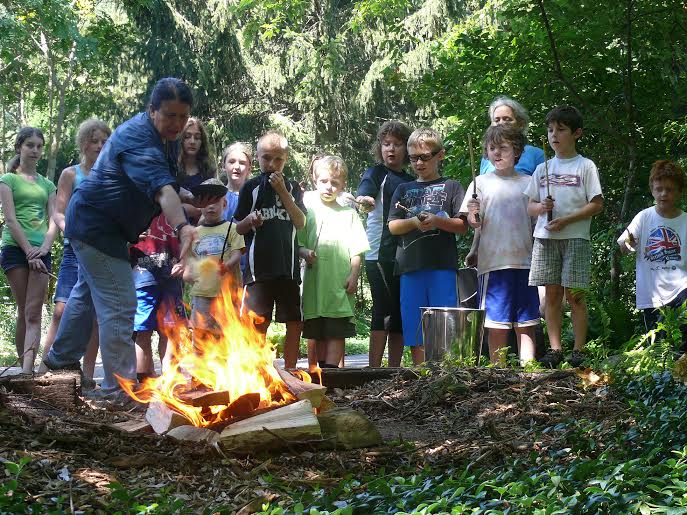 Campers learning magic around a fire.

Each day, the children have different lessons, which range from physics, geomancy, and divinations to ancient Japanese, Norse, Celtic, Egyptian and Indian magics. They record their lessons in handmade spell books, or “grimoires” for future reference. After lunch, they come inside for a shamanic journey, Alison explained. Each year, she writes a play for the children to perform. In the afternoon, they have play practice, then end the day with a game of Quidditch.

This summer, Alison and Joplin will host five, weeklong camp programs in Shelburne. Alison attributes the growth and success of Enchantment Camps in part to their website, Alison said.

“I don't think we could run our camps without our website. It has had to evolve over the years so that it is HTML5, and works on phones and tablets,” she said. “The website is the only way parents can check to see what we're doing, and the interactive visuals speak more loudly than any flyer or poster or paper ad we could ever make.”

Registration of campers has proved the most onerous aspect of the business. Alison and Joplin initially used a downloadable registration from, which parents would print, fill out, and return. “Then I had to manually input all the information (reading people's illegible handwriting a huge problem - particularly important details about allergies or contact information!) There were always mistakes, always embarrassing, and unprofessional,” Alison said.

Recently, Alison discovered POWr Form Builder, a tool which streamlined the process and saved considerable time. Now when registration is open, one simple form is embedded on the website. “With the POWr form, as I said to all the parents, it was like magic! The information populated the spreadsheet, the money came into Paypal, and our camps were full, some within 6 hours!” she said.

“We're moving too quickly in this society to do things inefficiently. We want to spend our time doing things that are playful and make the world a better place. Filling in forms is necessary but tedious. Any way we can streamline the process will free up time to do more magic!”