Dev Dutta was working in a research lab at the University of Alberta, studying breast cancer when he got involved in his first charity art show and auction. “Naturally, the idea of raising money for research that can positively impact those individuals afflicted with cancer while simultaneously showcasing artists and their work completely won me over,” Dev said. So much so that in 2013 he officially registered a group named Art for YoungSTARS at the University of Alberta’s Student Union, and since then it has continued to flourish and grow.

The name for his nonprofit came from when Dev was trying to design the new group's logo – the people he was drawing kept ending up looking like stars, he said. And that’s when he came up with the idea for the name “Arts for YoungSTARS.”

“Everyone has potential to create positive change,” he said. “All youngsters can be "YoungSTARS". All you need to do is realize and use that potential.”

While Arts for YoungSTARS initially focused on fundraising for cancer research, Dev said he realized there was perhaps something else his group was better suited to do. “There is a notion in society, especially among the youth I had encountered, that art doesn't have potential to contribute to society as much as science,” he said. “So I decided that our group needed to change the mindset of youth.”

And so Arts for YoungSTARS transformed into a not-for-profit youth organization that uses art to create change in both local and global communities. The group works young people to try to provide creative solutions that use art to deal with difficult issues, such as childhood poverty and student mental health.

“The mission of Arts For YoungSTARS is to inspire, empower, and create a young generation of leaders who are committed to using art to positively influence and care for their local and global communities. Our vision is to see youth everywhere able to access and use art as a powerful agent in solving issues in the world around them,” he added. 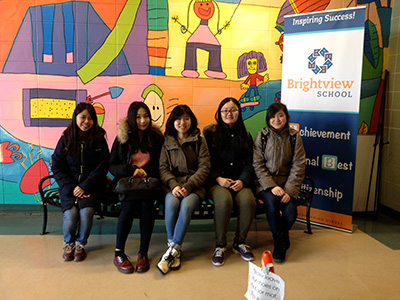 Part of the team who went to Brightview Elementary each week to mentor students.

In addition to working with various student groups at the University of Alberta, Arts for YoungSTARS has also started an afterschool art program at a number of elementary schools in the Edmonton area. “This is a value-based art mentorship program that uses art to instill important life-long values within young students from low socio-economic neighbourhoods. These values include generosity, kindness, teamwork, respect and so on,” he explained.

“In my mind, with art the possibilities are limitless. I wanted to use art to impact people positively, so that everyone could realize the tangibility of art's potential,” Dev said.

Soon after he registered the group with the university, Dev created the website, which, he says, looked nothing like it now looks today. “It is like my personal journal or artwork that I have been adding layers to make it increasingly rich and vibrant,” he said. He’s worked hard searching the Internet for companies offering products that will enhance his group’s work while sticking to his limited budget.

“You can maybe guess my joy when I came upon POWr plugins as one of the only businesses that offered a whole slew of elements that could be added to websites without any knowledge of coding,” he said. Dev uses several plugins on Arts for YoungSTARS's website, including our Facebook Feed, Twitter Feed, Tabs, Comments, Multi-Sldier and Social Media Icons.

“Most importantly, POWr plugins have allowed us to maximize our nonprofit mission so we can focus on spending every nickel on childhood poverty, mental health awareness, and other issues in our communities. As founder, my vision was for our website to autonomously and seamlessly spread the message that "art has the potential to positively impact our communities" on our behalf to the people living on the other side of the world, while we slept soundly on this side of the world,” Dev said.

“POWr plugins have played an important part in making this a reality.”