“Happy is the man who can make a living by his hobby” – Pygmalion, George Bernard Shaw.

Over forty years ago, David Butler bought an old Dodge Power Wagon as a project to work on in his spare time. Today, his hobby has morphed into a successful family business and an annual event where people from around the world travel to Iowa for a week filled with rallies, parades and vehicular adventures.

“He was frustrated with the lack of information and parts pertaining to these vehicles,” Kai Butler said of his father, David, after he'd bought the truck to work on. “So he started researching old truck manuals and visiting salvage yards to find parts-which soon led to much greater things.”

By 1983, the hobby had grown to such an extent that David began a business called Vintage Power Wagons, which specialized in providing parts and information regarding 4x4 Dodge Power Wagons, and their military predecessors from World War II. A few years ago, David retired, and Kai and his older brother Jens took over the family business. The business specializes in the vehicles that were made between 1940 and 1971, Kai says, because of the history of the trucks. 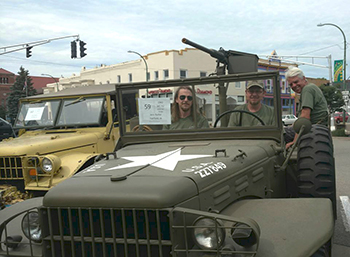 Kai, his brother Jens and their Uncle John

“We picked 1940 as a start date because it was the first year of real production of the military Dodge 4x4,” he said, “In 1972 some major design changes were made to the Dodge 4x4 vehicles which meant these new models had very few (if any) parts in common with the earlier models.”

Finding functioning parts of 40, 50, 60, or even 70-year-old trucks isn’t always easy, but the Butler family knows all of the tricks of the trade.

“To get your hands on parts for these old Dodge vehicles, you have to have an eye for them and you have to know some of the history of these trucks to know where to look. Many of the vehicles we carry parts for were made for the military, so parts were plentiful and have been well preserved,” Kai explained.

What really made the business possible in the beginning were what Kai refers to as NOS (New Old Stock.) These are parts in surplus from wartime efforts, which have remained in pristine condition regardless of their age. “Even today, I can unwrap an NOS part that has been packaged in cosmoline and the part inside is like new, even if it was packaged in 1945,” he said. 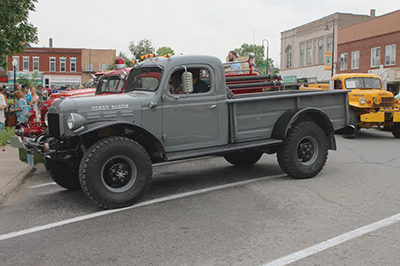 But of course, the supplies of NOS are drying up, and so the Butlers must rely on more than just leftover military stock. And so today, they now also reproduce truck parts, as well as buying used parts from around the world. Just a few years ago, they got a delivery of over 30 40-foot cargo containers full of parts and trucks that had been left in Thailand after the Vietnam War. Kai said they were particularly “hard to obtain.”

And Vintage Power Wagon doesn’t just source their products from far away, they also send them across the planet. While there are a lot of old Dodge trucks in America, there’s also a surprising amount all around the world.

“Many in places you wouldn't expect, but the majority of them made their way around the planet from military use or export contract,” Kai explained. “For the most part, Power Wagons are collectors’ vehicles but as of late there have been more people converting them to operate at higher speeds.”

“We ship to Australia quite often,” Kai said, “We've even had people in Antarctica inquire about Power Wagons parts.”

In fact, loyal customers from Australia have traveled the thousands of miles to Fairfield, Iowa, for the Annual Power Wagon Rally the Butlers host. This year’s weeklong event took place last week, and Kai said it was “possibly the best we have ever had.”

“We had 96 trucks in our parade and six days of fun events for Vintage Dodge truck enthusiasts, friends and family. We have trail rides ranging from easy to extreme off-roading, tractor pull and teeter board competitions, vehicle repair workshops, great food and more,” he said. 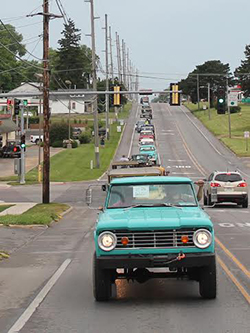 The parade of trucks at this year's annual rally.

And a large part of their success and reach is thanks to their website, which was redesigned earlier this year. “The new site has been a huge lift for our business,” Kai said, “We’re more visible on the web, our sales and web traffic have gone up tremendously with the inclusion of a mobile site and some new features that weren’t possible with our old site.”

And among those new changes to the website are a couple of POWr Plugins being used to simplify business and streamline orders. “The first plugin I used was the Form Builder, which allowed the flexibility I needed,” he said. “Unlike most form building software, the POWr form builder software allows the usage of reference images. The reference image I have used in my form have aided in breaking down language barriers and have assisted in educating people about these vehicles. This has helped ensure that our international customers and Power Wagon newcomers are ordering the correct parts.”

“I've recently started using the POWr Media Gallery plugin which is probably the best, most inclusive media gallery plugin I have seen available to date,” he said.

“Overall, I'm not sure what I would have done without these great plugins. Our website wouldn't be the same without them.”